skip to main | skip to sidebar

The owner of the betel box hostel often takes guests on tours, food walks and pub crawls. Last sunday, he decided to embark on a cycle tour. The guy's name is Tony Tan. A native Singaporean, he worked in the IT industry for about 7 years, before going to University College London to do an MBA. After his MBA, he decided to take a complete break from the corporate routine and set-up a backpacker hostel instead. Thats how betel-box came into being.

The name "Betel-box" stems from the betel chewing custom prevalent among the Malays. The Malays are among the native people of Singapore. Just like the Indians and Chinese (and sometimes the Japanese), they have a habit of chewing Betel Nuts. All guests are offered betel as a mark of respect and welcome. Thus, a betel box stands for hospitality, sincerity and simplicity.

We started off at the hostel and made our way to the east-coast beach. Tony explained how the map of Singapore actually changed physically, after the Govt. implemented massive land-reclamation projects. About 100 out of the 700 Sq Km area in Singapore is actually reclaimed land. 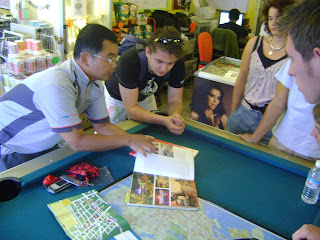 The beach stretches on for a couple of kilometers. The whole stretch is landscaped beautifully. The locals just love the outdoors. 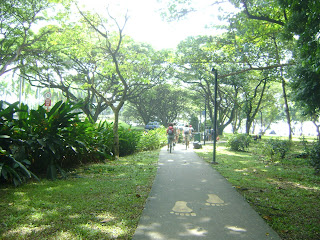 There are dedicated roads for cycling, jogging and roller-blading. 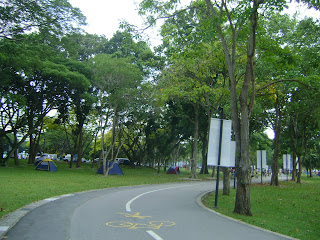 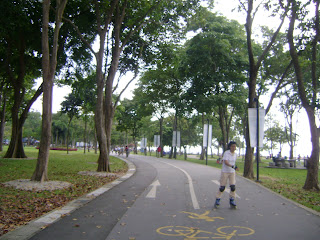 You can set-up tents for free. There are barbecue pits all over for the place. Barbeque parties and camping by the beach is a popular form of recreation. There are restrooms too, so you can freshen-up and directly head to work the morning after. 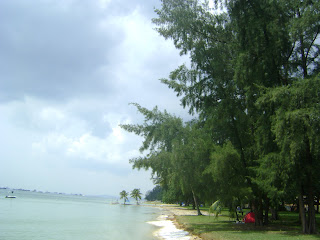 Therz a lake with equipment-on-hire for water-sports. Skiing costs about 40$ for 2 hrs.

From the beach we went on to visit an NGO that is trying to keep keep Singapore's rivers clean and conserve water. Tony explained the water problems here (Singapore imports her water from Malaysia), and how the Govt. is trying to achieve self-sufficiency in water by 2060 by engineering massive recycling projects that will result in altering the map Singapore.

The "river monster" is supposed to be a dragon who feds on garbage. The more garbage you dump, the fatter the river monster grows. If you don't stop dumping garbage soon, the monster will eventually grow so big, that you will lose your beloved river: 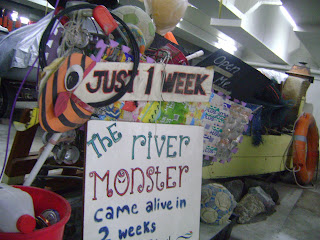 We cycled on to the city centre, heard and saw a lot about the city history and culture. Relieving the tour will bloat this post too much. Suffice to say that we were high, awed, excited and tired in the end. 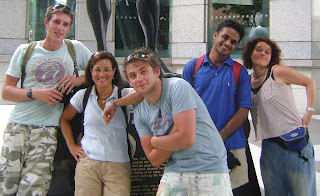 The tour lasted 7 hours; we covered about 50 Km. The group was small and interesting. Two cousins from England were touring. They made their living as "Adventure sport instructors". In fact, they both had university degrees in it! Another German girl was off to New Zealand on a work-holiday Visa. She planned to work in a farm for 6 months and use the money to come back and explore south-east asia. A Dutch lady bored of her corporate job in San Francisco decided to quit and travel for a year. Another Canadian girl was traveling to Australia, in the middle of her undergrad!

Speaking of which, one gets to meet many interesting characters in a place like this. Most of them are heavy-duty travelers, on the move for more than 3 months at a time. Most of them are from affluent countries like Australia and western Europe. Other than travelers, i met an Irish student interning at ST aerospace, a marine construction worker (hez a pro diver, does construction work under water), and the like.

The place has its share of weirdos too. There is a Nigerian guy, staying in the hostel for more than a month. Very friendly and harmless, he plans to go to thailand with a stranger he met here. He says he is into "IT stuff". When i asked him what exactly he meant, he replied " You know, com-pu-'ers and stuff". I asked him again, what domains/platforms/kind of clients he works with, and again he replied with a "jus com-pu-'ers and stuff, u kno...like aaye-tee stuff".

The Nigerian is a relatively benign guy. There was this old geezer from the US; quite an obnoxious fellow. He talks very loudly, even in the dorm area, which is much against the decorum. An ex-officer of the US Govt; he lives in Indonesia with wife # 5. Yeah, he's been married 5 times. (This piece of information, just like all other details of his personal life, i know for a fact because he forced me to listen). He was like "If you want to know anything about women, i'm the guy. I meet many young guys like you. They buy me lunch to listen to my advise". I continued staring at him with a stupid smile on my face. He probably wanted me to get him some lunch?
Posted by Shankar at 4:42 AM

lol, just read your entry.
you know, the unfortunate thing is that that old american geezer is back again and again... just yesterday the wife had a go at one of my gora staff members... it is so dumb as we are so careful with religious and cultural differences... yet she tolerates the bs that her husband incessantly pews... had that feeling that she is just having a go at a "weaker" gora because he is staff. cest la vie.